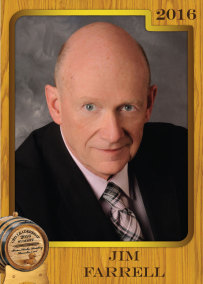 Jim Farrell founded PR First in 1998, and serves as President of this six-person public relations firm located in Hanover, MA. PR First works with businesses and organizations to help them boost their visibility and showcase their expertise through the news media. Prior to founding PR First, Jim was Manager of Public Relations for Dickinson Direct, Braintree, MA and Vice President of Dubin &; Farrell Advertising, Weymouth, MA.

His work prior to public relations was in the field of weekly newspapers. He is the former editor and publisher of two weekly newspapers on the South Shore of Massachusetts, the (Kingston) Independent Voice and the Carver Independent, as well as having published several specialty newspapers. He has authored columns on marketing and public relations for several business newspapers and magazines. Jim is a member of the South Shore and Hanover Chambers of Commerce and serves on the Board of Directors for each Chamber. He lives in Kingston, MA, with his wife, Susan. He is a former member of the Board of Directors for the Kingston Public Library Foundation and is former Chairman of the Kingston Housing Authority.